This time of year every inch of the farm is teaming with life, reawakening after the long winter, everyone from tadpoles and snakes to young chicks to the migratory bats that returned to our boxes last week.  The earliest shoots in the garden are poking their heads out of the soil and buds on the flowering shrubs and fruit trees are beginning to swell.  We took this as our sign to empty out the sheep and goat stalls of their winter bedding and harvest the compost from the bedding piles we stacked up in the autumn.  We stuck the shovels deep into the piles and found the darkest, richest, compost we could imagine.

Actually, better than we had even hoped. Of course some of the straw has not broken down but it is still a robust, biological and nutrient-dense powerhouse to charge up the perennial borders and the fruit canes and shrubs.  We will also use it to mulch in those vegetable areas with taller cropping plants (like tomatoes, peppers, etc.).  The satisfaction of generating your own mulch and compost is really hard to overemphasize.  Not only do you have full knowledge of what is in your garden but it is an important step in closing the loop and not bringing in outside products to sustain the homestead.

Indoors we have been busy planting seeds for a range of cut flowers and vegetables.  The sweet peas that we sowed at the end of February were pinched back when they had two sets of leaves and now we are hardening them off by keeping them outside in a sheltered shaded porch area during the day and bringing then in for most nights.  Probably next week we will get them into the ground and just cover them on those colder evenings.

Our seedlings at the moment include Tithonia, Calendula, Nasturtium, Verbena bonariensis, Tomatillos, and various lettuces.  Soon we will be sowing the zinnias, chards and kales and direct sowing a bunch of goodies in the veggie garden too.

Even the sheep have re-emerged from winter.  The grass has greened up enough that they are regularly out of the barn happily munching. And they are sporting a fresh new look, as last weekend the sheep were sheared, which is an exciting bi-annual event.

Annabel is very tame girl and just lay there in the sun on the shearing rug seeming to enjoy her full-body massage.  Millie, despite her larger size, has a generally wary disposition.  She kicks and moans at points during her shearing but she definitely seems more comfortable now that she isn’t carrying around around 7lbs of wool on her!

The chickens are finally enjoying their full days of free ranging again.  Everyone is enjoying moving around the garden again, people and animals alike. We have not had a fox sighting yet this year.  Soon, probably. But for now the chickens are enjoying their relaxed freedom and peaceful dignities like dust baths in private, away from each other, in their favorite spots.  One of the general favorite spots for dust baths is right next to the house foundation.  Being under the soffet, the soil is perpetually dry and the chickens have a good vantage point from there.

But the biggest news of the week is that Rose is back with Trevor and Guinevere! If you recall, we had problems with the social hierarchy between Trevor and Rose.  Well, a little bit of sunshine breeds a wealth of kindness it seems.

On the most beautiful spring day this week we reintroduced Rose to the herd.  The other two were tied up and then released one at a time.  Rose was jumping around, practically giddy to be back.  And Trevor and Guinevere acted as if Rose had never left.

So now it’s my turn to give a sigh of relief and enjoy the tranquility of the evening spring sky as I finish my chores. 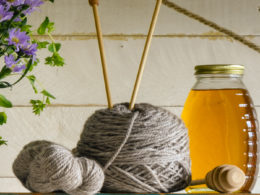 Weaving Adventures
The Lessons We Learn. . .
Shearing Day is Coming!
A brief hello!
Llamas and sheep and lambs, oh my!
The cost of farming